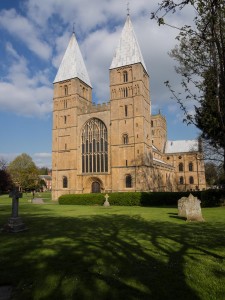 Southwell Minster is the Grade I listed Anglican Cathedral of the Diocese of Southwell and Nottingham with a history dating back to 956. In 1108 the Norman reconstruction of the Anglo-Saxon Minster commenced, reaching the arches below the central tower by the 1120s. Circa 1234 the small Norman Quire was replaced by the current Early English Gothic masterpiece, and towards the end of the 13thcentury the Chapter House and its famous carvings the ‘Leaves of Southwell’ were completed. Major renovations were completed in the early 18th and late 19thcenturies.

The ‘Leaves of Southwell’ project will renew part of the 200-year-old High Quire roof in the original medieval fabric of lead, install a sensitive lighting scheme in the Chapter House for the first time  and underfloor heating to help stabilise the environment. A lift will create access into the Slype and other interventions will provide access to the new interpretation scheme to increase understanding of the significance of the Leaves of Southwell and their impact on the Minster as a whole. An Activity Plan will focus on engaging the public with the conservation works, drawing in schools from more economically deprived areas of the county, expanding the family offer, and reaching out to older members of the community.

Alix led the pre-development phase working with the volunteer fundraiser and other members of the team at Southwell securing a Round 1 grant of £299,700 on the first attempt. She was then appointed as the Business Planner, Activity Planner and Evaluation Consultant and worked with the newly appointed professional team and staff during the Development Phase to develop a Business Plan, Activity Plan and Evaluation Framework.  As part of this she led the consultation which involved over 800 teachers, children, volunteers, visitors, non-visitors, stakeholders and potential partners.  We are currently awaiting the outcome of the Round 2 submission.