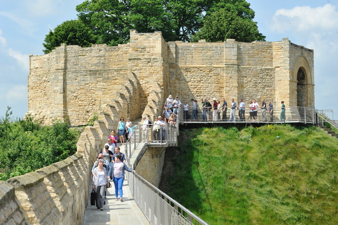 The award winning £22 million project, Lincoln Castle Revealed restored the Castle’s walls, created a new wall walk, opened up the Georgian and Victorian prisons, installed interpretation and a new underground vault to display Lincoln’s copy of the Magna Carta. The Castle re-opened to the public in 2015 and the Activity Plan was delivered through to 2017.

I had already undertaken formative evaluation to test interpretation themes, the content and style of a film about Magna Carta and audio-visual elements in the prison with visitors and non-visitors, including tourists and families. In 2017 I was commissioned to undertake the summative evaluation of the project. The report was for the core funder, The National Lottery Heritage Fund.

I used a variety of data sources including a wealth of photographs and secondary data such as visitor figures, findings of visitor surveys and an economic impact study. Interviews with twenty five former and current staff members, consultants and councillors added another layer of primary data. The photographic record was a compelling and visual way to tell the story of the project and highlight the transformation of the site, for example an image of the public queuing to see the Castle on opening day. All aspects of the project, construction, project management, fundraising, catering and retailing were evaluated through the interviews to identify lessons learnt for future projects. Secondary data was used to measure success against the original targets.